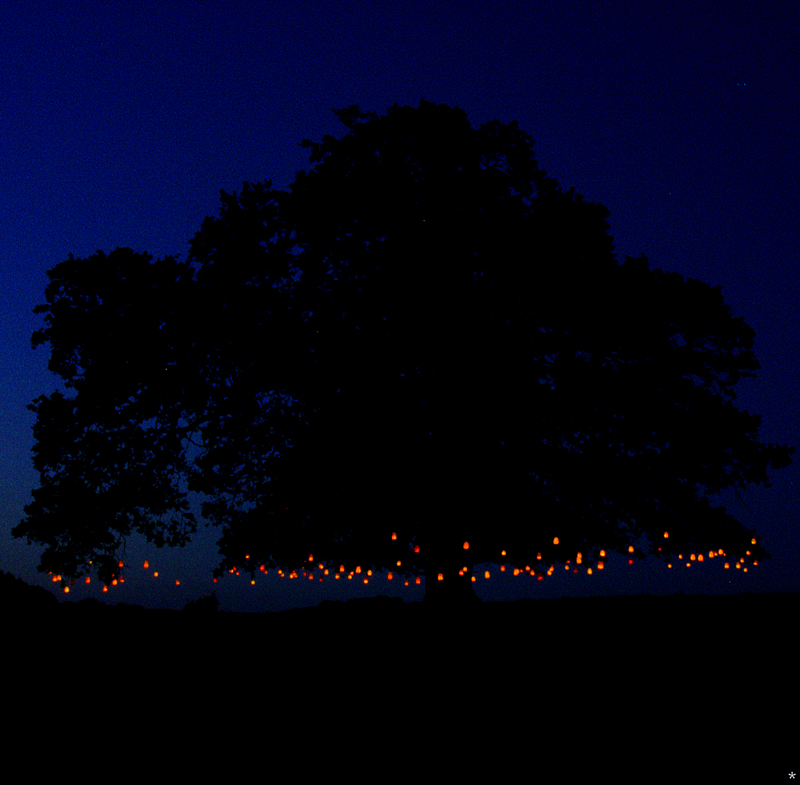 There is a single point somewhere towards the end of the summer, before the winds switch direction, before the leaves curl and begin to flash their autumn fire.  A moment so brief that you may just miss it.  It is the last throes of summer and it has a habit of sneaking off unannounced. Here one moment and gone the next.                       However, something different happened this year.  The summer hesitated for a beat.  After the hottest few months on record, September prepared to take a final bow.  A magical thing happened.  A beautifully still, gentle evening rolled over the woods and fields surrounding the hill we call home.

We had seen the tree for years.  Proudly standing off in the distance and yet, as is so often the case, we had never visited it.  Knowing only it's silhouette by heart, we had decided that this was the tree.

The idea had formed months earlier.  Weeks of preparation now stretched out behind us as we nervously watched the weather forecasts predict the arrival of high winds and cold temperatures. Time was running out quickly and we had only one evening left.

Little did we know what the summer held in store for us.  We gathered the hundred lanterns, making last minute adjustments to the makeshift hangers, we crossed our fingers and headed out over the fields.

Tucked away in a field not far from our house on the hill stood our tree.  We worked in near silence lighting and hanging the lanterns for hours while our friend Ana set up her camera.  The day had started to gently wind down.  The clouds cleared and the wind paused as if taking a moment to see what was going on.  As the deep blue darkness crept across the horizon the air became crystal clear and seeing their cue, the lanterns began to dance.

It's hard to explain what happened that evening.  People from all round the area saw mysterious lights way off in the distance.  Some were moved.  Some, it turns out, were a bit freaked out.  One inquisitive soul ventured over to us bringing with him the theories of the villagers he had left behind.  Pagans and UFOs seemed to be the main reasons for the mysterious lights in the distance.  It turned out that most of them had been in the pub for the evening and theories had grown tall.

"I'm so glad I came out here; it's beautiful; I don't want to go back" he announced after silently studying the scene.  We agreed.

Later on, long after the pub had closed and everyone had gone home, the old oak tree looked out on the two figures left looking up into its glowing bows.  Six hundred years of moments had been and gone for the tree and this had been quite an unusual one.  Our years of creating had inspired the birth of our new business Made on a Hill.      As we packed up to make our way home and thanked the noble tree.  We both knew, we had just marked the beginning.

I'd like to think the tree may remember the evening the wind held its breath and the summer paused to watch the lantern tree.